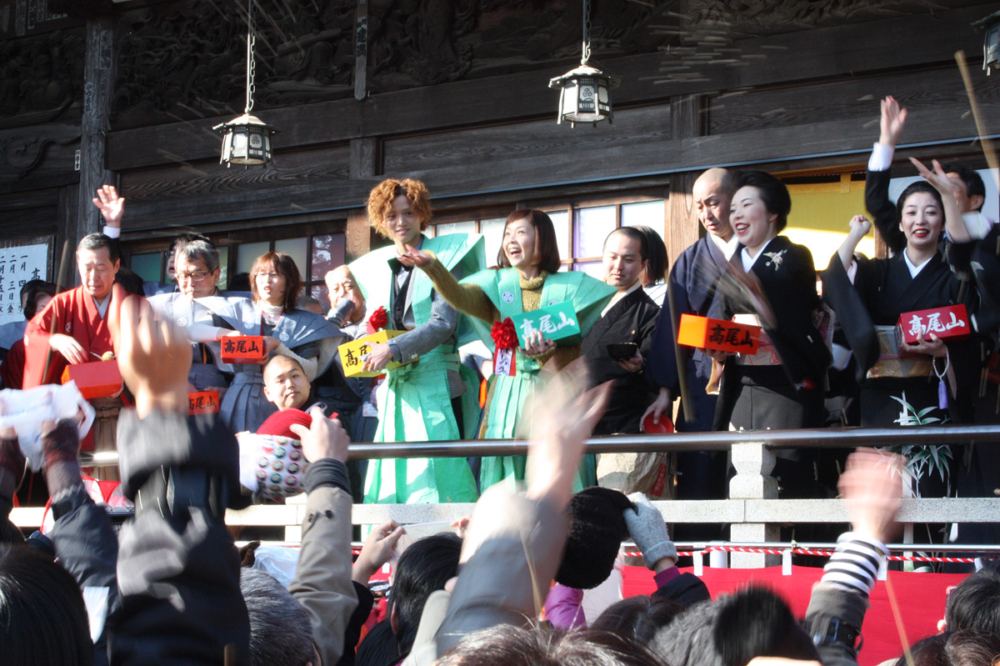 Each year on Feb. 3rd we celebrate the festival of Setsubun. In Takao the Setsubun ceremony is held in Yakuo-in Temple.

Every year, sumo wrestlers, popular singers and other cultural icons are invited to Setsubun to share in the joy of the festival.

One part of the festivities involves throwing dried soy beans seven times a day (the first time is early in the morning at 5 am), but the most exciting time is around 12:00 when the celebrities participate all at once.
This year I participated in the 12:00 and 14:00 events.

I arrived at Yakuo-in just before 12:00, though it was already crowded with many people.
In front of the main hall, the security guards guide participants to less crowded parts of the hall.

First I went to the right into the press box.

It is better to decide if you want to be on the right side or the left side because you will not be able to move when people once the bean tossers enter the main hall.

Now, at 12 o’clock, the march begins, and the guests make their entrance.

Those who have been selected to throw beans enter the main hall and are taught the traditional Goma Rite.
I didn’t know this until I went there, but the actual throwing of the beans was not at 12 o’clock, but around 12:30.
There is a waiting time of about 30 minutes between the Goma Rite and bean throwing.
However, it is quite interesting to watch the preparations, so you will never get bored.

At around 12:30, the Goma Rite is over, and people come out of the main hall..
Now the bean toss can commence!

The bean throwing itself was shorter than I had expected. The event last about 5 minutes.
I decided to participate in the next round at 14:00 because that was not enough.

I went to the top of the mountain until 14:00, but when I came back, the celebrity participants were taking a commemorative photo on the stairs.

A young entertainer joined in on the 14:00 session. The audience also seemed younger than the 12:00pm crowd when the enka singers participated.

While waiting, a mascot gave a PSA to the crowd.

Well, the throwing of the beans has finally begun anew!
This is the final round, so everyone is excited.

After a while, the throwing of the beans was over, and this year’s Setsubun festivities concluded.

After everyone leaves, one can find many beans on the ground.

I participated in the Takao Setsubun festival for the first time this year, I thought that it would be a very enjoyable event with guests who attracted various generations.
Although it is bustling, it’s not so crowded that you can’t move around, and have a good time.
I think it would be interesting to plan a trek around the Setsubun festivities!