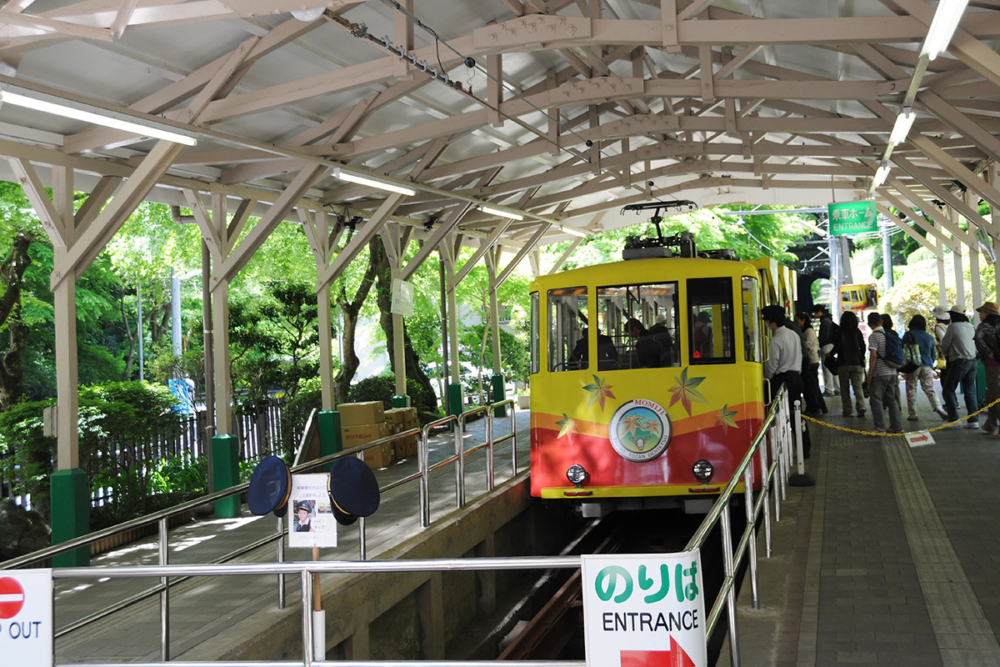 The steepest slope in Japan! Only 6 minutes to Mt.Takao's midpoint!

In addition to the cable car, Mt. Takao also has the chair lift. At the foot, both cable cars and lifts purchase tickets are available at the same station building.
Both prices are the same.

Both services travel to almost the same elevation, but the lift takes about 12 minutes and arrives at a slightly lower elevation.
When the cable car arrives on the hillside station , there are shops and facilities such as “Takaosan Sumika” and “Beer Mountain” in the immediate vicinity of the station.

Kiyotaki Station at the foot of the mountain is a 5-minute walk from Takaosanguchi Station on the Keio Line.
There is a plaza in front of Kiyotaki Station with many shops around it.

To get on the cable car, first buy a ticket and then get in line.
The ticket office is inside the station building.
You can purchase your tickets from the ticket booth or the ticket machine.

However, you can use Pasmo/SUICA at the ticket machines to purchase tickets.

It may be difficult to understand when there is a queue when it is crowded, but you need to buy tickets before lining up.
(The staff will announce that the tickets should be purchased first when it is busy)

* Junior high school students and older are charged as adults.
* One preschooler per adult is free.
For details, please see the Takaosan Tozan Railway website .

* Depending on congestion, the first train may be earlier.
* Departs from Kiyotaki Station and Takaosan Station at the same time.

Normally it comes every 15 minutes, but runs every 7 minutes when busy.

There is the green “Aoba-Go” and the red “Momiji-Go”, which depart from Kiyotaki Station and Takaosan Station at the same time.
When you pass each other in the middle, everyone gets their cameras to take pictures.

The cable car has the steepest angle near Takaosan Station on the hillside measuring in at an angle of about 31 degrees. As far as cable car tracks go, this is the steepest slope in Japan .

In terms of safety you need not worry. The cable used is 10 times stronger than the industry standard. Even in the event that it may break the cable car is designed to be able to stop safely after sliding only 2 meters .

There is one crew member in the car, but he is not driving. The cable car is operated from the booth at Takaosan Terminal.
The on-board crew member is mainly responsible for announcements.

The history of the cable car is surprisingly old! It began operating in 1927 (Showa 2), and has a history of over 90 years.
The current vehicle is the fourth generation, and improvements have been made over time.

Takaosan Station has an elevator that can be used by wheelchair users and people with reduced mobility.
(Kiyotaki Station at the foot of the mountain has no stairs)

Those with strollers are not allowed to use the elevator, but if you need help the station staff will help you carry your stroller into the cable car.

Dogs and cats can ride in the cable car, but they must be placed in a pet cage or carry bag. However, carry bags that allow the head of your pet come out are not allowed.
So dogs seem to be limited to only small dogs.
(In the case of the chair lift, you can hold your pet without having to put it into a carrier.)

If you don’t have one, carriers for dogs and cats are available, so you can rent a cage.

Cable Car hours of operation may be suspended due to inspection and maintenance, so check here for updates.