Congestion during the autumn leaves season (2018). From the base to the summit 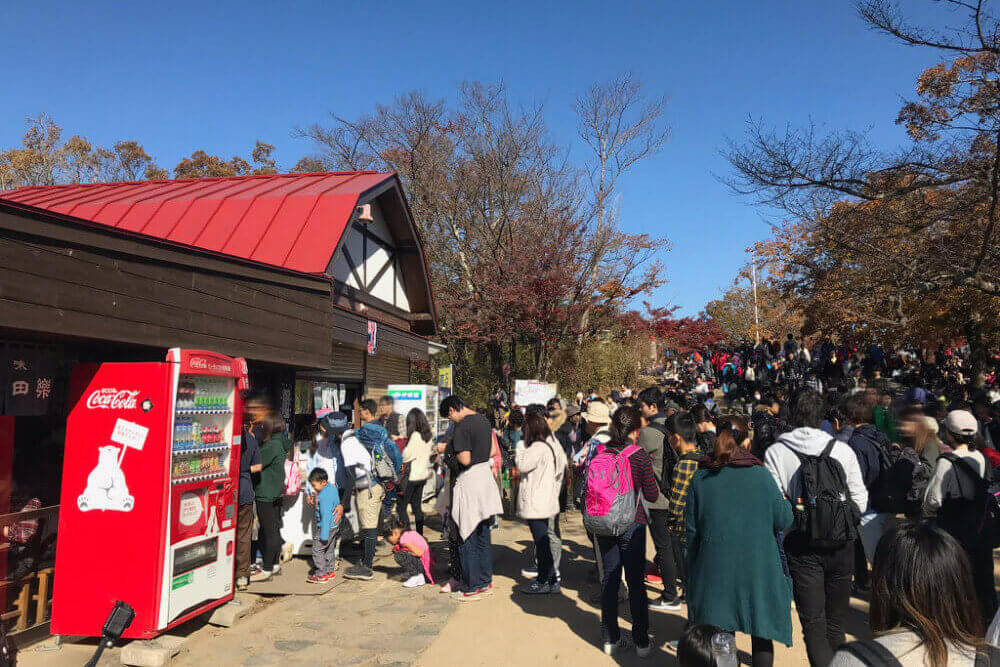 Mt. Takao has the largest number of hikers/visitors annually in the world. The season for Fall leaves is particularly crowded.
Typically, around 11/23  is the best time to see the autumn leaves, and it is the most crowded time.
The photos in this article were taken from November 23 to 25 in 2018. It was very crowded during the 3 day holiday with nice weather.

In order to ride the cable car on a weekend during the Fall leaves season, you may wait in line. Depending on the time of day, you may have to wait anywhere from 30 minutes to an hour (though wait-times seem to have improved in recent years).
The soba restaurant near the cable car Kiyotaki station has a line of people who want to eat in around noon.
(Photos around Kiyotaki Station were taken around 12:30)

The longer the cable car wait time, the better off you’ll be walking along the trail. (Walking up Trail 1 to the upper station on the cable car takes about 50 minutes.)
For this reason I decided to climb Trail 1 instead, although this trail was getting crowded too.
(These photos of the mountain trail were taken around 11:00)

Many people who are caught off guard by the cable car wait-time decide to hike however they are not dressed for a hike.
Climbing the distance of the cable car requires a certain degree of physical exertion, so you may want to bring towels and drinks.

Trail 1 is typically fine because it is quite wide, but Trail 6 is too narrow to overtake other hikers. Therefore, congestion is likely to occur and it will take longer than usual, so it is wise to plan for potential congestion.
(Trail 6 is a one-way climb going up during the Fall leaves season)

Around the Cable Car Station

The popular power spot Yakuo-in is also crowded with many worshipers during the autumn foliage season.
To the summit, you will pass through the precincts of Yakuo-in Temple. The road near the summit is a set of narrow stairs that quickly becomes another point of congestion.
(These photos of Yakuo-in were taken around 12:30)

Even if you arrive at the summit, it is still crowded. The summit is large, but it is so busy that it is hard to find a place to sit down around noon.
There are three soba shops around the summit, but again there are many lines.
(These photos at the summit were taken around 12:00)

There is a large restroom near the top of the mountain and a restroom next to Takao Visitor Center.
And both have long queues.

The parking lot of Mt. Takao becomes full soon during high-traffic seasons such as when the autumn leaves are falling.
If you can’t enter the parking lot, you will find coin parking lots around Takao Station, the prior next station.
We recommend using the train during times like this.

There you have it, that’s the congestion from base to the summit of Mt. Takao during peak visiting season.
The early hours are relatively not so crowded, so if you start to climb early or select Trail 3 which is also a generally free route, you may be able to climb comfortably.
If you visit Mt. Takao for autumn leaves, I hope that this report will helped you. Enjoy Mt. Takao!